2020 has been a disappointing year for travel enthusiasts worldwide. The dreaded Covid-19 has not only restricted trips, but the extended isolation has made people distressed. In such a circumstance, the rejuvenating power of traveling may just be the thing you need to feel cheerful again. With a coronavirus vaccine on the horizon, it seems that will be much brighter for those of you who are eagerly waiting to tour around the globe. In this article, we share seven destinations that everyone must visit once before they die (of Covid-19 or otherwise). 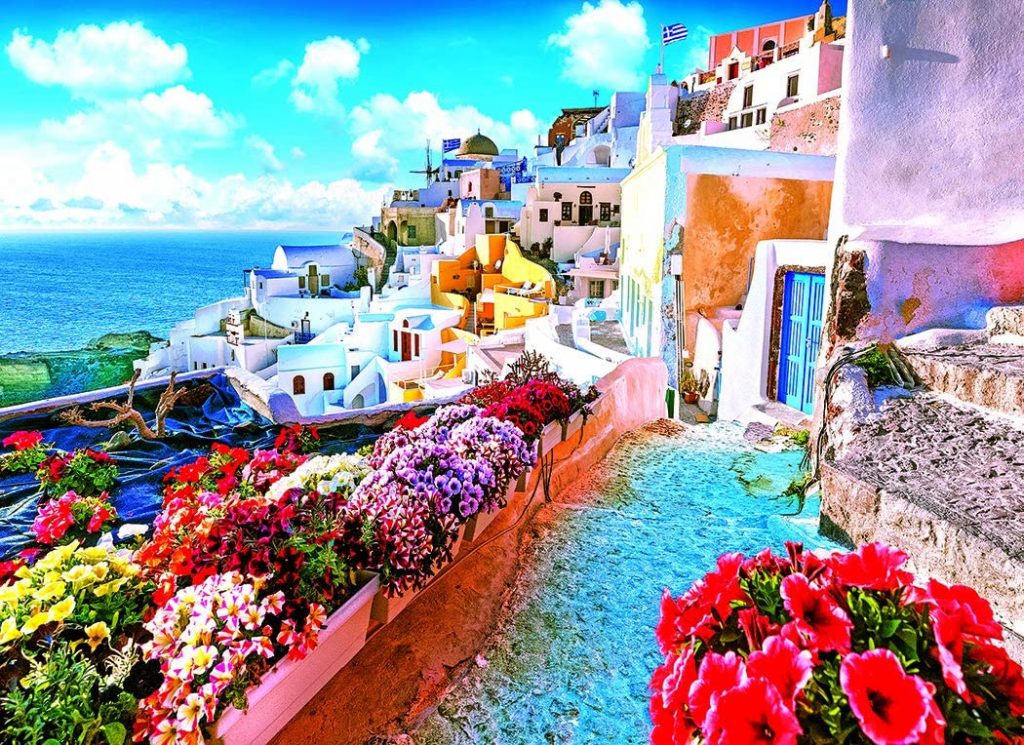 Santorini is an island in Greece well known for its volcanoes, pebble beaches, cliffs, scenic vistas, blue-domed churches, and giant windmills. This Greek island’s picturesque beauty draws lovebirds and newlyweds from all over the world to experience the inspiring sunsets, hot springs, cuisine, and luxurious resorts.

The famous volcanic craters of Santorini are visible from the sky if you travel by air. Upon reaching the island, you’ll need a smart car or ATV to explore the islands’ surroundings through its rough roads. Two of the island’s most preferred destinations are Oia and Firá. You’ll find many small villages and relaxing settings between these two crowded towns.

Firá is the capital of Santorini. The city is full of white cubic houses, whirling lanes, tiny squares, and abrupt cliffs. Oia, which is twelve kilometers away from Firá, attracts tourists for its beautiful sunsets. Situated at the northern parts of Santorini, Oia’s village is a treat for the eyes due to its whitewashed houses, cute boutique hotels, and waterfront public places.

Besides these two major attractions, Santorini is popular for Caldera, the Akrotíri Archaeological Site, Red Beach, and Pyrgos (Santorini’s former capital). Suppose you want to experience Greece’s historical sites and monuments. In that case, you must visit Santorini’s Ancient Thira (site of early-Byzantine and Roman buildings), Firá’s Archeological Museum, and Museum of Prehistoric Thira. 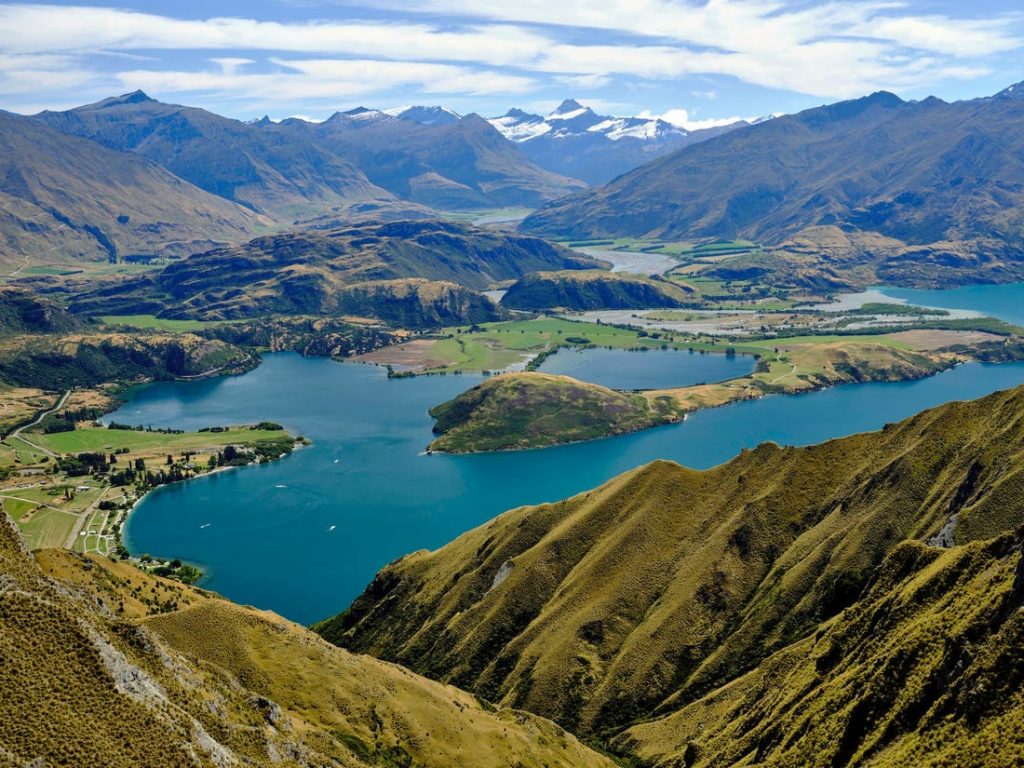 After the coronavirus crisis gets over, New Zealand should be one of the destinations on your list, and it’s not just because of the nation’s brilliant handling of the pandemic. New Zealand’s dramatic geography, its sparkling coves, coastal glaciers, snowy peaks, and clean rivers make it a once in a lifetime destination.

When you decide to visit the nation, you must be ready with the ultimate New Zealand vacation itinerary so that you don’t miss its exciting attractions. Fiordland National Park is one such world-famous attraction in New Zealand which also happens to be a World Heritage Site. Fiordland offers the visitors vast lakes, gushing cascades, mountain peaks, and offshore islands. The site is also a hub of adventure sports like hiking and sea kayaking.

People who prefer the seashore can visit the Bay of Islands and Queenstown. The Bay of Islands, which is not far from Auckland, is well-known for its versatile marine creatures such as whales, dolphins, and penguins. The Bay is also a haven for water sports events like sailing, fishing, and yachting. Queenstown will offer you all these excitements along with its top-class hotels, restaurants, and spas. Some other attractions in New Zealand are Rotorua, Mount Cook National Park, Napier, and the Coromandel Peninsula. 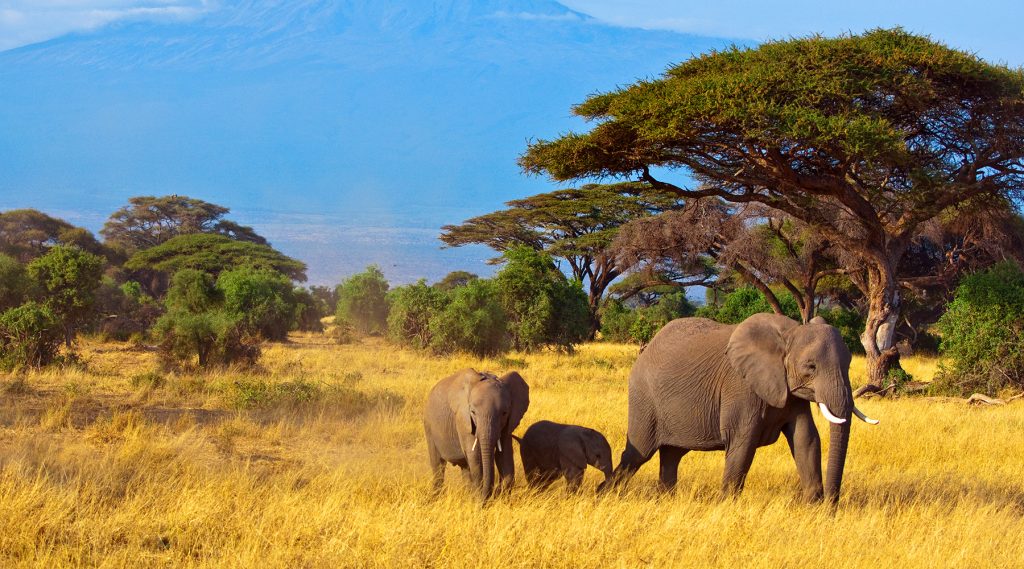 South Africa is perhaps the best place on earth for safari camps and jungle adventures. The African nation entices tourists with its beautiful gaping gorges, vast deserts, golden savannah, and wildlife. Besides the national parks, South Africa is also famous for its luxurious lodges and private game reserves.

Shark dives, coral reefs, colossal mountain ranges, and golden beaches are major tourist attractions of South Africa. However, the country’s national parks possess its most cherished charm, its wildlife. Kruger National Park is a world-famous safari park, which is a four-hour drive from South Africa’s largest city, Johannesburg. The park offers visitors the opportunity to see all the significant wild creatures like buffalo, elephant, lion, rhino, and leopard.

If you wish to taste South Africa’s urban life, picturesque towns like Stellenbosch and Cape Town should be on your list. Cape Town is home to some breathtaking landscapes and botanical wonders, such as the Table Mountain, Kirstenbosch Botanical Gardens, False Bay, Cape Point, and the Victoria and Alfred Waterfront.

Destinations like the Garden Route, Blyde River Canyon Nature Reserve, and Robben Island are some of the other major tourist hotspots in South Africa. You’ll need an all-terrain four-wheeler to explore the versatile land and wildlife of South Africa. When you are on such an outing, install a roof rack awning on your car so that you can take occasional breaks and relax beneath the awning. 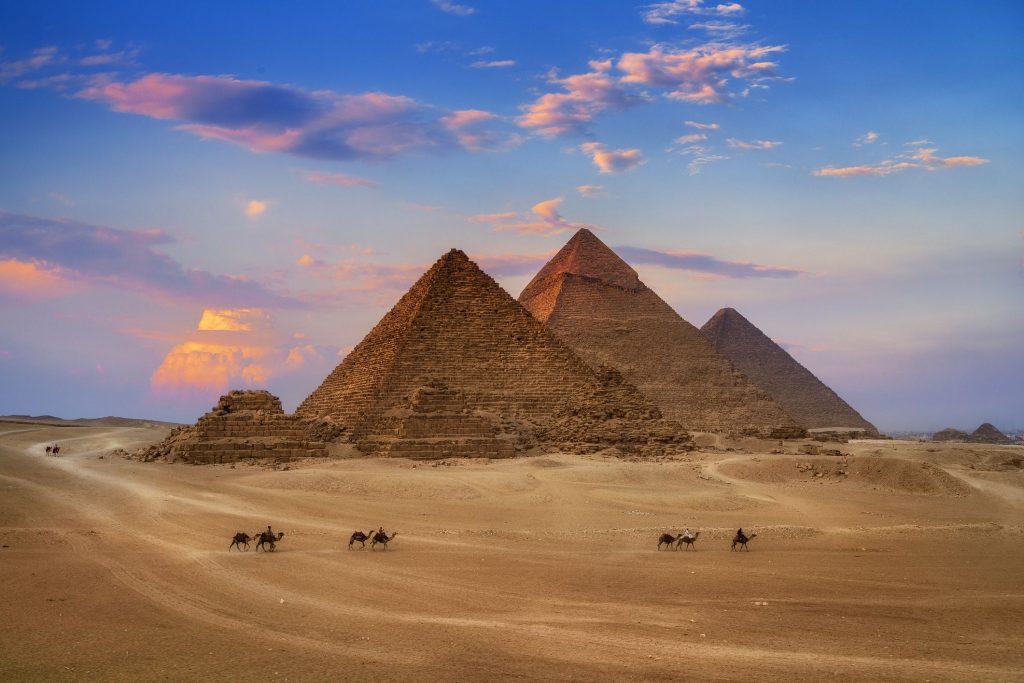 Egypt, the land of tombs, temples, and ancient Pharaohs has a lot more spark to offer to modern-day tourists. Egypt has vast deserts, fantastic scuba diving facilities, and Africa’s longest river, Nile. Egypt is an interesting mix of adventure, culture, and tradition that people of every age can enjoy. While beach lovers can go to the Sinai, archaeology enthusiasts will enjoy Luxor. Cairo, the capital of Egypt and the largest city in Africa, offers all the luxuries of a metropolis. For a taste of the countryside, you can visit Aswan.

Everything said, the Pyramids of Giza, one of the seven wonders of the ancient world, are Egypt’s most recognized landmarks. These Pyramids, built for the great Pharaohs, have mesmerized travelers and archaeologists through ages.

The next most fascinating place in Egypt is Luxor, which was known as Thebes in ancient times. The town is famous for the Karnak Temple, Memorial Temple of Hatshepsut, and Valley of the Kings.

Abu Simbel is another temple that will create similar awe in the minds of the visitors. It is the temple of Ramses II, adorned with majestic wall paintings and standing guards. In an incredible UNESCO operation in the 1960s, the temple was relocated away from its original setting as it was set to sink underwater. 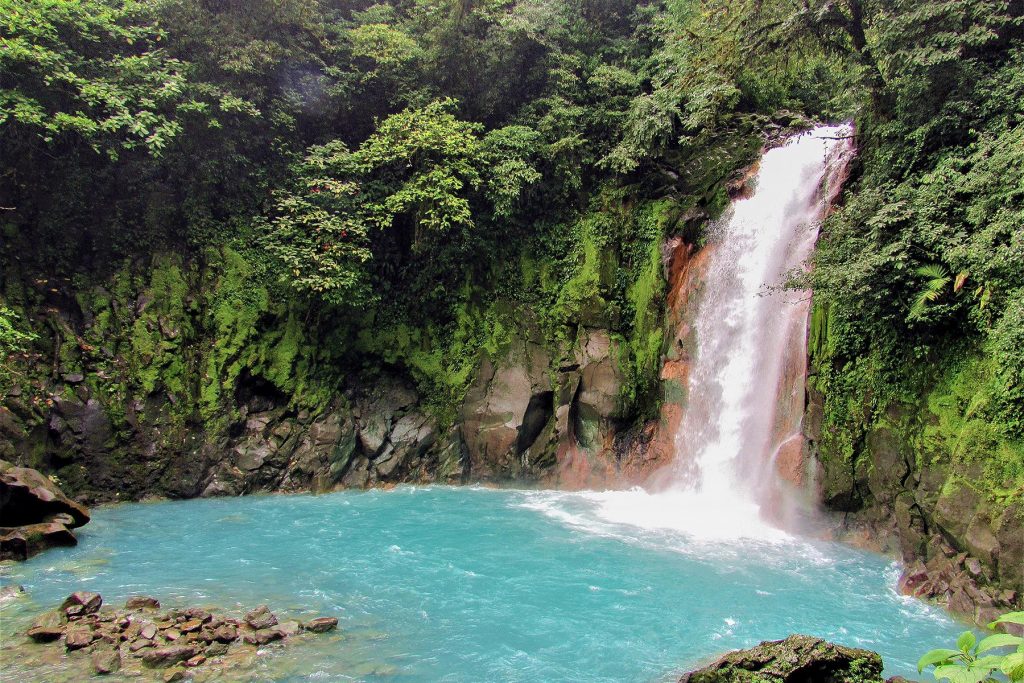 Manuel Antonio National Park is one of the most popular attractions of the nation, with picturesque beaches, diverse wildlife, and lush green forests. A visit to the park will let you meet various sorts of colorful birds, squirrel monkeys, butterflies, and capuchins.

If volcano viewing is your priority, you should visit the Arenal Volcano National Park that hosts the Arenal Volcano. This volcano had a huge eruption in 1968, killing 82 people. The park is also home to massive numbers of Costa Rican reptiles, birds, mammals, and amphibians.

The Cloud Forests near Monteverde offer visitors a unique chance to see uncommon plants and creatures (like jaguars and pumas). Some other tourist destinations of the country are Dominical, Tortuguero National Park, Tamarindo, Jaco, and Braulio Carrillo National Park.

Nature lovers will particularly enjoy the humid climate of Monteverde, with its expansive cloud forests that ooze with waterfalls and strange plants – including yellow bromeliads and orchids. Visit familydestinationsguide.com to check out more destinations like this one. 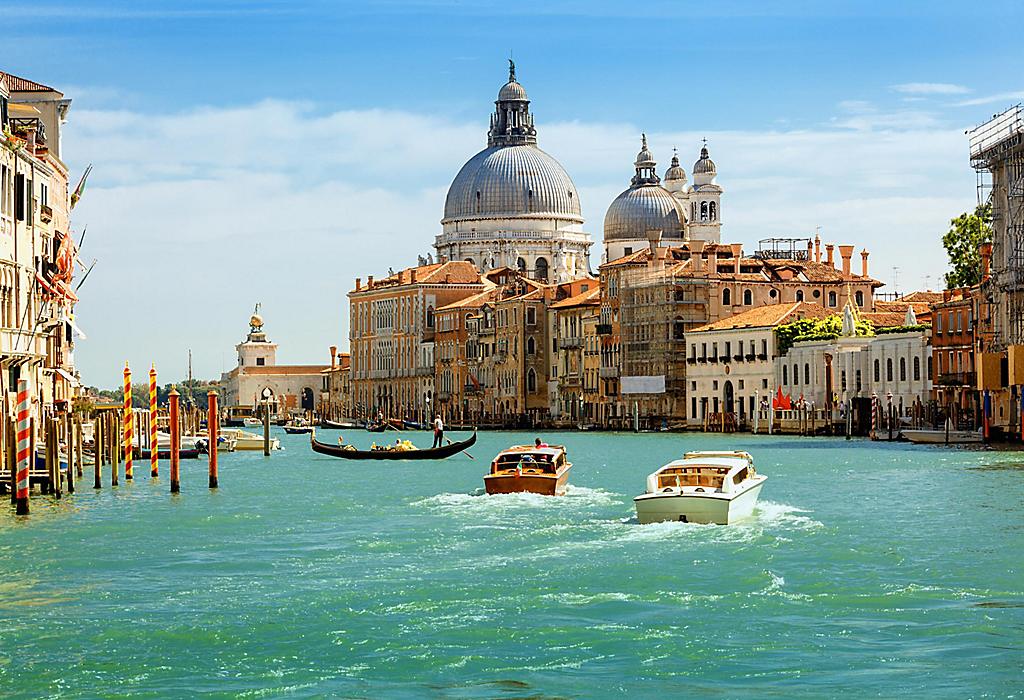 Venice will provide an excellent city experience for people not comfortable in losing themselves in the wilderness. The city has a strong cultural heritage and is unique to tourists for its beautiful houses, winding streets, canals, religious monuments, and art museums.

If you and your friends plan to stroll, chat, or drink coffee in Venice, there is no better place than St. Mark’s Square. The three sides of the square are framed, and mosaics and exotic curves occupy the open end.

Canale Grande or the Grand Canal that sweeps through Venice is the next best thing to experience. You’ll find remnants of old gothic palaces opening onto the grand canal. Perhaps a trip by a Venetian Vaporetto along the canal will let you see all such historical monuments. 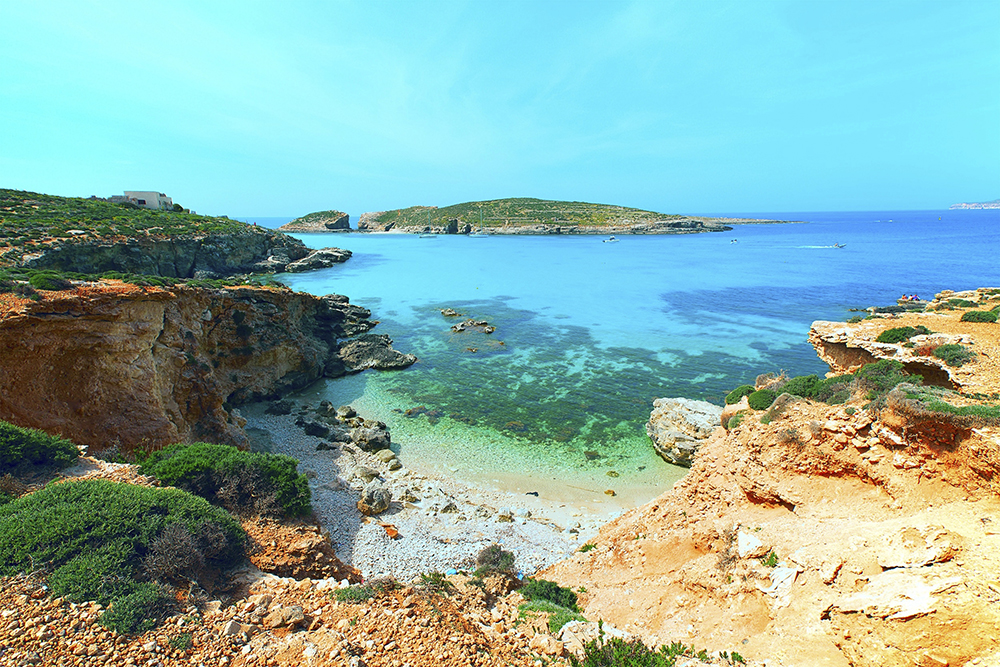 If you are from Europe and want to visit a secluded island nearby, Gozo’s island will be a great choice. This peaceful island is only eight kilometers away from Malta. This scenic island is known for sandy beaches, beautiful coves, lush green hills, and little farms.

Although famous for a sleepy ambiance, the Mediterranean island becomes a center of attraction during summers. Its picturesque beaches and crystal-clear waters make adventures like scuba diving, snorkeling, and swimming more enjoyable.

When you arrive in Gozo, its capital city, Victoria’s surrounding landscapes should be your first destination. The center of the famous city is situated on a hilltop and was constructed by Saint John’s Knights in the sixteenth century. Historic spots of the city include the Folklore Museum, the Old Prison, and the Cathedral of the Assumption.

Ggantija Temples, believed to be one of the rare freestanding monuments in the world, is a major attraction in Gozo. It is a UNESCO-listed prehistoric site that dates back to around 3500 BC.

For visitors who want civic luxuries, the Seaside Resort of Marsalforn offers beach entertainment, adventure sports, and upmarket restaurants and cafés. If you are more interested in magnificent sea scenes, the Baroque Church of Nadur, which overlooks the Mediterranean Sea, will provide you an excellent view from the hilltop.

This 1,400-acre tourist attraction is a must-see for any history enthusiast visiting San Diego. Balboa Park features numerous gardens, museums, and greeneries. The park was created from 1915 to 1916 and to our surprise, most of the buildings remain from that era. As such, much of the design and architecture is Spanish-style. Couples who met here are often said to stay together forever, and as such, various events places near the area cater to weddings. If you’re one of those fateful couples, this site can help.

It is said that traveling tests your patience and pushes you beyond your comfort zones. Exposure to new places, people, and cultures opens up new horizons for you and makes you an evolved human being. The places mentioned above will certainly help bring a fresh perspective in your life. However, you must take all the safety measures when you travel in a post-Covid world. With the right planning and information, your tour will be all the more worthwhile and memorable. 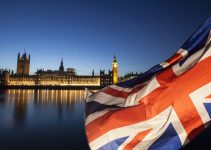 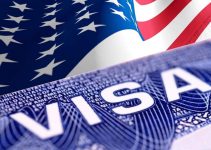 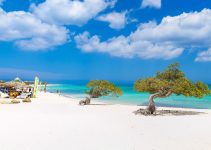 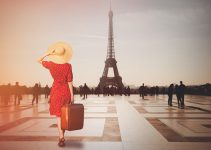